Ivermectin isn’t in the news much compared to a few months back, but I have friends and family who are still talking about it. I recently came across a fascinating analysis of the situation from psychiatrist and blogger Scott Alexander. He formerly wrote at slatestarcodex.com and currently continues his efforts at astralcodexten.substack.com. Razor sharp and prolific, he is funny, incredibly detailed, and ferociously dedicated to rationality and examining all sides of an issue.

His post is titled “Ivermectin: Much More Than You Wanted To Know” and it is aptly named… the post is extremely long and detailed. I haven’t read the entire thing, as a lot is an analysis of various studies, and I skimmed through those sections. However in the second half, Scott presents an elegant and fascinating hypothesis. First though, let’s go through some background on scientific studies, then look at Scott’s steps and reasoning.

It’s easy to find a study that proves just about anything. Eggs are bad for you. Eggs are fine! Ditch the butter… actually wait bring it back. Caffeine, chocolate, and meat might be simultaneously bad, good, and somewhere in between. How can we make sense of all this?

The answer is we have to look at meta-analyses. These are statistical examinations of a group of studies, to try to find a signal within the noise of the varying conflicting individual studies. Unfortunately, this process is not simple or cut-and-dry. New techniques are practices for meta-analyses are still being developed. Additionally there are a lot of ways that bias, error, and fraud can creep into studies, which can throw off the meta-analyses. So a systematic review of the studies is needed to check for things such as p-hacking, publication bias, faked data, and more. It takes hard work to root out all the various issues.

Thankfully, Scott has done the heavy lifting for us. He starts with a list of 29 studies, 25 of which appear to show that Ivermectin beats a placebo using various measures such as hospitalization rate, viral load, deaths, etc. This list is from ivmmeta.com, a site doing a meta analysis of ivermectin studies. The green boxes are studies where ivermectin did better than the placebo, the red boxes are where it did worse: 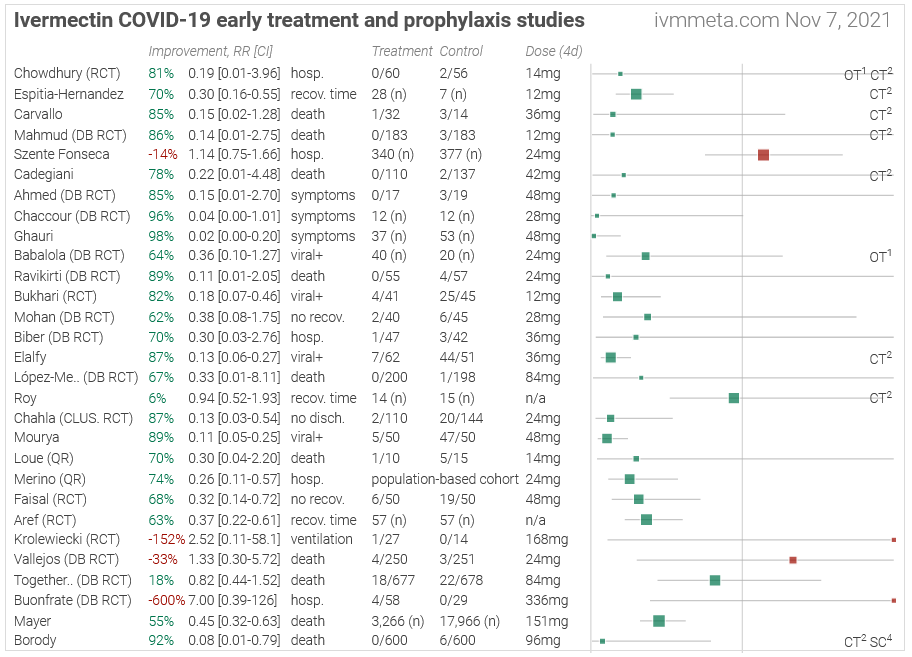 At first glance, this seems pretty convincing. However, all studies are not made equal. It is very possible that the results of a given study ought to be discounted because of fraud, bad methodology, insufficient sample sizes, etc. Here comes the mind-numbing, tedious bit. Scott goes through each study, and, for various reasons which you can read about if you really want, narrows downs the credible studies to these:

About halfway through his analysis, Scott learned of the efforts of epidemiologist Gideon Meyerowitz-Katz, who was doing a similar review of ivermectin studies. They ended up with similar but not identical lists. For his final list of credible studies, Scott eliminated any study that either he or Gideon found questionable. Which narrows it down to these 11 studies:

Scott summarizes the work thus far (note, I think his count is off by 1 for some reason):

We’ve gone from 29 studies to 11, getting rid of 18 along the way. For the record, we eliminated 2/19 for fraud, 1/19 for severe preregistration violations, 10 for methodological problems, and 6 because Meyerowitz-Katz was suspicious of them.

However, there are 3 studies showing ivermectin performed worse than a placebo. Additionally, there is some question as to which performance measures are the best statistic to use in the graph:

Meyerowitz-Katz accuses ivmmeta of cherry-picking what statistic to use for their forest plot. That is, if a study measures ten outcomes, they sometimes take the most pro-ivermectin outcome. Ivmmeta.com counters that they used a consistent and reasonable (if complicated) process for choosing their outcome of focus…

So, Scott decided to select what he considered the most relevant, common-sense outcome variables from these 11 studies, then performed some statistical analysis. Depending on how he ran the analysis he found a trend in favor of ivermectin, but not enough to be statistically significant. Or, a statistically significant trend in favor of ivermectin, but only when not following best practices. There aren’t enough of the credible studies remaining to draw a firm statistical inference.

Still though, it does seem like something is going on. We don’t necessarily want to discount these studies simply because the proof isn’t statistically iron-clad. And so finally, we reach the fascinating hypothesis.

The most powerful studies in favor of ivermectin for treating COVID-19 come from areas of the world that have lots of worms. In the list of credible studies, the one by Mahmud took place in Bangladesh. The study by Ravakirti was from East India. The study by Bukhari was from Pakistan. Etc etc. These are all places with lots of various types of parasitic worms. Here is a chart of the prevalence of roundworms (source):

Why would studies from these areas show that ivermectin improves COVID-19 outcomes? One explanatory mechanism is that the helminth worm can produce changes in the body’s microbiome. These changes modulate how the immune system responds, suppressing it, which decreases the body’s ability to fight the worm… as well as COVID-19. So, how to stop the helminth worms from messing with your immune system during a COVID-19 infection? Kill them with ivermectin.

Another explanatory mechanism is related to a common treatment for COVID-19: corticosteroids. Much of the damage from COVID-19 comes from the body overreacting to the virus (remember cytokine storms?) Thus, doctors use corticosteroids to decrease the body’s immune response, protecting it from the harmful overreactions. However, these immune responses are also necessary for the body to control a roundworm called Strongyloides stercoralis. Without a properly functioning immune system, the worms multiply out of control in a “Strongyloides hyperinfection” (yikes!) and the patient often dies. How to use corticosteroids without suffering a worm hyperinfection? Kill them with ivermectin.

Amazingly, it may all come down to: ivermectin does help with COVID-19, but only in areas that also have issues with worms. And this would make both sides of the debate… wrong. Scott cautions that this is of course just a possibility. There are a lot of (educated) judgement calls going into his analysis, and it is just one of multiple meta-analyses. But I hold Scott in high regard, and it would do a lot to explain the confusing results of the studies. It’s possible ivermectin does have some very small benefit in areas without worms. But it definitely isn’t some sort of wonder drug for COVID-19 as many proponents claim.

Science is really hard. The whole process is riddled with the potential for human bias, mistakes, and fraud. Many of the studies showing miraculous results for ivermectin were later shown to be fraudulent… check out the section on the study by Cadegiani for a good laugh, or perhaps a good cry. The scientific community is continuing to improve upon methodological and statistical processes as well as ways of detecting problems with studies, but it takes time for researchers and journals to uniformly adopt them.

Some studies showing that ivermectin helped were probably right… but only for people who were dealing with parasitic worms! For your average American, ivermectin probably won’t do squat. You can take it if you really, really want (it is fairly safe, though there are potential side effects), but you’re likely wasting your time and money.

Those who shout down and mock proponents of ivermectin by shouting “HORSE DEWORMER!!!” and accuse them of being anti-science are not being helpful. People are concerned and scared, and they are trying to follow the science of these pro ivermectin studies. Such mockery only adds fuel to the fire of tribalism and increases our divide. Instead, I believe we should have a calm discussion of these highly complicated issues, and continue to educate people on the scientific process.

On the flip side, those who blindly believe in every new fad treatment for COVID based on a few studies are being equally unhelpful. Their fixation on these fringe treatments often stems from a reflexive anti-establishment attitude (The FDA says don’t take it? Screw them, I’m gonna take it!) as well as anti-vaccine sentiments. I understand the impulse to be skeptical of the medical establishment, and at times that skepticism can be valid. But it is also important to be skeptical of your own skepticism, and to realize that more often than not the experts know what they are talking about.

View all posts by atrozan